I was lucky enough to have recently been invited to visit Brindle Distillery, the home of Cuckoo Gin in Chorley, Lancashire.

The cuckoo has been linked to Brindle since the middle ages – it was a commonly held belief that each year, the first call of the cuckoo heralded the arrival of spring and the land would provide sustenance for the village. Legend has it that the local community, upon hearing the first cuckoo call, built a wall around the field where the cuckoo was. This was an attempt to keep the cuckoo there, ensuring perfect conditions for farming all year round; but the wall was just two layers of stones short, and the cuckoo escaped. Now, anyone who is born and bred in Brindle is a cuckoo, just like Gerard, the owner of Holmes Farm.

Holmes Farm was a traditional farm until very recently when Gerard and his wife Cath, along with son in law, Mark, and children  Liz, Alice and William, decided to diversify into distilling gin. Mark learned the art of distilling for before starting on perfecting the recipe for Cuckoo Gin.

The old cowshed at the farm has been transformed into a distillery, surrounded by the land that helps to make Cuckoo Gin. That’s what is so special about the team at Brindle Distillery, they love the land and what it provides. Their ethos is sustainability – spring water from a neighbouring field is used to distil the gin and the barley is grown on the farm to produce alcohol along with other locally sourced ingredients.

Once the raw materials have been gathered, the distilling process starts by firing up a huge wood burner to generate heat for the equipment inside to create the alcohol in an eco-friendly way. Byproducts from the distilling process are fed to the cattle and chickens at the farm, and natural waste products are spread on the fields to enrich the next harvest of grain. Even straw form the farm is used as packaging to keep the precious bottles of gin safe during transit. It’s inspiring to see the love and pride that goes into making of Cuckoo. 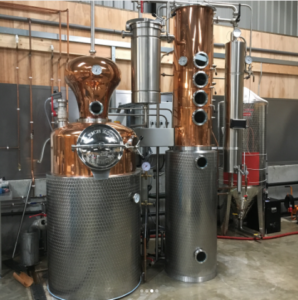 Inside the newly converted cowshed, Maggie the huge copper still takes pride of place. Maggie is named after Gerard’s great aunt, who loved her gin. I think she’d be incredibly proud that her name lives on in this way at Holmes Farm. Mark’s first still is also on display, and although it’s a beautiful piece of engineering, Maggie really is the star of the show here. It’s Maggie’s job to take the freshly brewed alcohol and pump the vapour through layers of juniper, citrus peels, coriander, chamomile, cardamom and cinnamon, resulting in Cuckoo Gin.

Once the distilling process is complete, the incredibly beautiful bottles are labelled and packed by hand. The bottles depict the blue Lancashire sky and the fields of Holmes Farm, and of course, the Brindle Cuckoo takes centre stage.

At the time of my visit, the cowshed had just had a bar installed and will soon be open to the public to visit, see Maggie in all her glory, and enjoy a glass or two of Cuckoo Gin. Cheers to that! 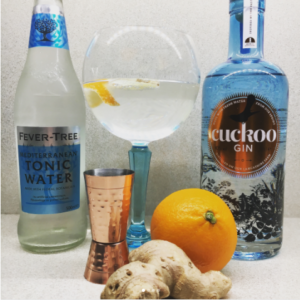